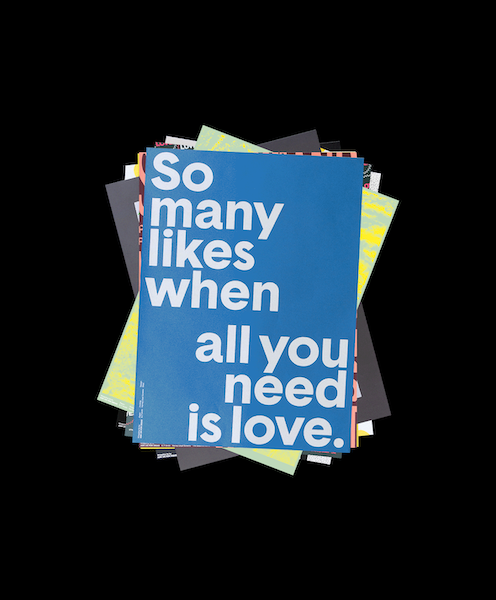 Leave it to BBH Founder and Creative Sir John Hegarty to distil an essential truth, and a good line, in one.

Still, he’s not wrong. When you’re a founder preoccupied with growing your team and building a seriously brilliant product, you need someone who’s obsessed with creating to take on defining that crucial brand identity or killer campaign for you – and that’s where creative agencies come in. With 10,000 in the UK alone, it can be a nightmare finding the dream team that doesn’t just get your business, but gets you.

Enter Huckletree Soho citizens, Ask Us For Ideas. Founded in 2010 by Nick Bell and Toby Wilkinson, AUFI connects ambitious brands, big and small, with the world’s most remarkable agencies. That doesn’t mean the biggest, the most established or the old crowd™️ – we’re talking the agencies who are doing the most. Think of team AUFI as creative matchmakers – with all the considered thought and care that implies.

AUFI’s network has expanded across the UK, Europe and Us and now counts the top 1% of the creative landscape, including the likes of APFEL, Koto and The Beautiful Meme. No matter how far it grows, one thing remains central to the AUFI magic.

No mind is an island – to make great work, you need to be with the right people. This isn’t about faceless intros and ‘makes sense on paper’ arguments. AUFI aren’t afraid to whip out a list of ‘sometimes-invisible’ reasons why you should go for it.

But let’s take it back to the start. If you’re about to take the plunge and take on a creative agency, what’s the secret to a brilliant relationship? Nick’s advice:

“Make sure you spend time with the agencies you’re considering hiring and their teams, as much as is possible, same as it is in any relationship. An ability to trust each other, work together, push each other when you need to be challenged, and support each when the going gets tough.”

Mutual trust is vital, and Private View(s), AUFI’s podcast, delves into just that. Often choosing a creative agency boils down to carefully edited portfolios and the number of Yellow Pencils on the mantelpiece. Each episode of Private View(s) offers an alternative, pushing past the PR and giving us an insight into the people and the thinking behind the world’s most exciting creative studios. Dipping into it? Try Koto’s Founder James Greenfield mulling over the curious British tendency towards tall poppy syndrome…

It’s unsurprising that they place such emphasis on bonds when friendship is a key element of the AUFI story. Like Like Huckletree Shoreditch citizens Matchpint, AUFI is a labour of love between two old school friends – and that means navigating the sometimes tricky founder/friendship balance. Nick reflects:

“Ha. The Pro is we know each better than anyone and there’s a bond of loyalty there that doesn’t exist in many relationships. The con is that we actually probably spend less time out of work hanging out than we used to. I see him more than anyone else, and so if we spent the weekends together on top of that we might lose our minds.”

The proof is in the pudding (or creative campaign). Nick and Toby’s bond of loyalty has borne incredible work… but which is their favourite?

“That’s like asking a mother who her favourite child is BUT a recent fave of ours is pairing one the world’s best loved craft beers (can’t say who at the moment, unfortunately) with an agency called Made Thought. It’s super unexpected and when it hits the shelves, I think it will be a game-changer.”

For AUFI, investing in people goes beyond pure gut instinct. They recently became citizens of Huckletree Soho, our VC-first hub – and it’s down to a key element of their business, which includes working with some of the world’s most progressive VCs.

As founders become ever-more savvy when it comes to choosing who invests in them, brand is a key differentiator for both – and having AUFI’s expertise to call on is a real boon to their portfolio. From Warby Parker to Peloton, Harry’s to Bulb, the list of businesses transformed by agencies within the network is testament to AUFI’s interest in forging truly beneficial relationships. The ultimate cherry on top? AUFI takes equity in the most exciting early-stage businesses they see, and pass on tip-offs to their VC network.

That’s just one way Nick, Toby and co are sharing the love with startups and bigger brands…

This Christmas, they’re playing Father Christmas for their fellow Huckletree citizens – some of whom will have found a limited edition screenprint in their stocking (or at their desk) this year…

A ridiculous 227,000 miles of wrapping paper is thrown away every year and AUFI has had enough:

“We heard from an agency we work with that all most all Christmas wrapping paper is non-recyclable, due to the ink types and plastic content. We’ve been friends with the GF Smith team (a specialist papermaker) who suggested we could use their FCA approved environmentally friendly paper to make a run of wrapping paper that didn’t harm the environment – and we jumped at the chance. We asked 12 different agencies to submit designs, and worked with hand-screen-printers Harvey Lloyd Screens to print the limited run for us.”

Think streaky bacon by Don’t Panic Partners, hip hop icons by Lowrie and Base Design’s satirical take on social media addiction. Whether it ends up on your private studio wall or conceals that Nintendo Switch 360 tucked under the tree, you can be smug in the knowledge that each design is planet-friendly example of the power of creative collaboration.

Need creatives on side? Keep up with AUFI here.