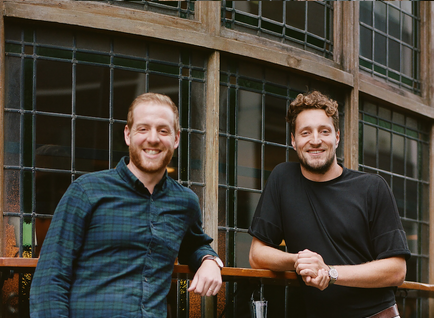 The best friendships are the ones that push you to the next level, remind you you’re unstoppable, and change the world right by your side. In the first in our Braver Together series of interviews, we find out how Leo MacLehose and Dominic Collingwood’s 17 year friendship has survived and thrived after building and growing Matchpint, together.

He may be biased though, having gone into business with his best mate since age 13. Leo and Dominic Collingwood met during double biology, bonded on the rugby pitch, and have been “best friends ever since,” Leo explains. Their business, Matchpint, pairs up sports fans with pubs where they can watch their favourite games.

Through thick and thin

Going from voluntarily hanging out to spending every waking hour with another person – building a business that may or may not work – is difficult no matter how close you were before embarking on that journey. And while Leo and Dom would both agree their friendship is stronger than ever after nine years in business together, it’s not been an easy transition.

“Early on was the most difficult period,” Leo admits. “We were both trying to find our place. At the really early stages, you share everything ─ every win, loss, every task almost. There was a bizarre amount of protection and ego.”

Dom, on the other hand, experienced it slightly differently. Matchpint had ultimately been Leo’s idea ─ he’d come up with it while studying in Manchester ─ and so for Dom to let Leo take on the CEO role was pretty natural. But as the business got bigger, and they had more hands on deck to take care of the operations tasks Dom was managing, it became less clear what he was supposed to be doing. “For the first 18 months [it was OK], but I then really struggled to realise what my role was. At age 22, I had a lot more ego than I have now, I was a lot more competitive and a lot less equipped with the emotional tools to be vulnerable.”

Over time, the pair have honed their communication skills, in the same way a married couple might work on how they speak to each other. If something happens that sends one of them into a spiral, they’ll spill their emotions, using the shorthand caveat that “this is a first draft”, Leo explains. More recently, they’ve been carving out time for weekly lunches, outside of the office, where they both come armed with feedback for the other. “Often the best feedback you can give is when you tell someone they’ve done something amazing ─ it’s so easy not to recognise the things you’ve done yourself,” Dom explains. “Without having someone hold up a mirror it’s hard to know what you’re doing well and not doing well.”

Crucially, it’s a time when both founders are ready to hear what the other has got to say about them, and they show up to the meeting “open minded and open hearted”, Dom explains.

It certainly helps that Dom and Leo’s friendship hasn’t always been in top condition – falling out at 18 years old for two years after experiencing “women issues”, they describe it. “Even by the time we were 21 and going into business together, we’d experienced highs and lows through our friendship and come through it,” Dom says.

“We have a real family in the office,” Leo says, proudly. “[It’s been so] helpful to have a really honest, candid team that points in the same direction.”

This sense of solidarity is very much a product of staff learning by observation. “If Dom and I can criticise each other in an open forum, [they see that] it doesn’t call into question how much love we have for each other. If that’s being done right at the top it can seep through to the whole team,” Leo explains.

“It’s difficult to create an environment in which people really feel like they can speak up, give feedback,” Dom says, adding that his approach to leadership has been very much inspired by Kim Scott’s book Radical Candor, which argues that being direct but respectful is the best way to propel a team forward. “Everyone gets the idea that we are better together when we’re constantly giving feedback ─ reinforcing brilliant work or critiquing work that could be better.”

It’s a culture that Leo says he also identifies within the wider Huckletree community. Working from Huckletree Shoreditch, he says, not only provides desks to put laptops on but “you’re almost part of this joint ecosystem that’s trying to grow. Everyone’s talking about their growth ─ not to show off, but because everyone’s on the same journey.”

“This feels like a massive office we just happen to share with other people,” he concludes. “But this is our office, and we’re on this collaborative journey together.”