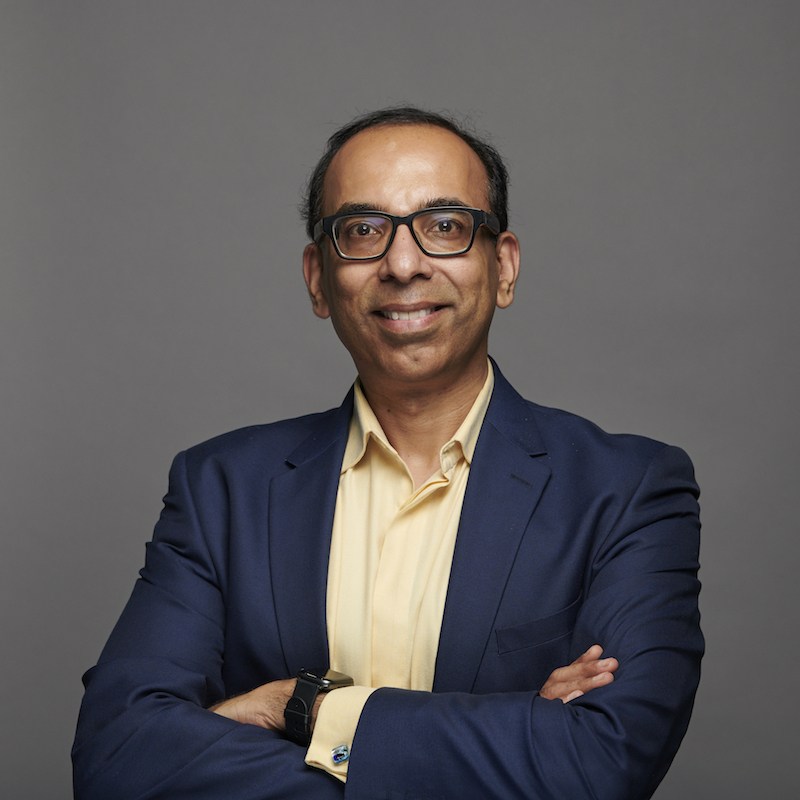 Are smart fridges the secret to better health?

Do Gen Z really want humans taking care of them?

Just some of the questions Digital Health Futurist Maneesh Juneja explores on a daily basis. A Huckletree member since the early days at our first workspace in Clerkenwell, Maneesh has always played an active role in our community. When he’s not traveling the world, you’ll find him at Huckletree Shoreditch pondering questions like the above and enlightening us on the latest HealthTech he’s testing (currently, a sensor stuck to his arm that allows him to measure his glucose levels in one second just by tapping his phone on the sensor).

Ahead of the launch of PUBLIC Hall, our first GovTech focused workspace, we caught up with Maneesh for his unique perspective on the future of HealthTech and how startups could transform the government’s approach to healthcare.

“I am grateful that we have a system like the NHS, but if we really want to improve the health of people, we have to look beyond the NHS. Behaviour change, structure of cities, education, transport, discrimination on gender, disability, race and sexuality – even policing. If you’re telling the population to get out and walk more, but cuts to policing has left some people not feeling protected, that could lead to some becoming  less physically active and that impacts their health. We have to stop worshipping false gods – and thinking the NHS is the only way to better health.”

ON TECH AS A PRIMARY CAREGIVER

“Take Annabelle: an 11 month old girl whose first word was ‘Alexa’. As Annabelle grows up, perhaps her primary trusted entity is an Amazon machine – what will that mean for the NHS and generally, will she trust machines more than humans? When she’s growing up and going through puberty or school problems – will she feel she can trust a machine more than a counsellor, NHS doctor or friends?

Policymakers on the front line say humans will always prefer to speak to human beings, like doctors and nurses. However, Annabelle and her cohort as they grow up may say, ‘I prefer machines as humans might be biased/judge or discriminate against me when I share my real feelings.’ Government is saying ‘this is how we’re designing the NHS and councils’ – but we’ve built a system that currently won’t cater for what Annabelle and her cohort might want.”

“We have a framework and regulations designed to protect us from harm, e.g. the side effects of medicine, so government has an important role to play. However, part of the issue about trust is some of the people in charges’ motivations for implementing certain policies. The trouble with politics and private sector politics is people are often motivated by short term personal interests i.e. what will it take to get me re-elected/to be a CEO/what will it take to get profits to rise.

What’s it going to take for government in particular to create an environment where it’s attractive for leaders to share a long term vision? In the UK, I’ve yet to hear a bold and courageous vision for the next 30-40 years above and beyond their timeline in politics.”

ON THE POWER OF STARTUPS

“Startup founders that I’ve met usually turn to solve a problem because they’re frustrated, angry and disappointed. In HealthTech, often I’ve found people with no medical background have solved a problem in financial service/advertising/retail and developed things that consumers have loved. A crap experience in a hospital could then inspire them to devote their next adventure in life to helping book people book appointments online.

The energy, optimism and tenacity that startup founders have and a desire to make the world a better place, not just in their own country, but on a global level, will hopefully continue to ignite change in both central and local government.”

ON THE FUTURE OF HEALTHTECH

There are three ways tech and healthcare come together:

“Professor Dame Sally Davies’s 10th report as Chief Medical Officer considers what the state of the public’s health in England in 2040. One scenario is that each of us would have an electronic health engine monitoring our choices and what we do. When it comes to Prevention Tech, our smart fridge in the future runs out of food, knows what the national dietary guidelines are and reorders food automatically based on that. That’s nudging us to better choices.

The flipside is people saying, ‘Why do I want the government influencing what my smart fridge orders, what about my freedom to choose if I want bacon or cottage cheese?’ The route to having a healthier population is not going to be straightforward as government knows best.”

“There’s a role for tech to play here: if a disease is developing, what if we could detect diseases before symptoms even appear?  It’s great that the UK government has kicked off their Accelerating Detection of Disease challenge.

Many car companies are working on virtual assistants that you interact with as you drive. Today, you can buy a mainstream car and say I’m hungry and the car brings up the 3 nearest restaurants! We’re going to see the rise of conversational interfaces  – one day, alongside that, we’ll have the emergence of digital therapeutics. A new generation of medicines, which are apps that you download, instead of popping a pill. Imagine the future where you car detects you are experiencing symptoms of mild anxiety and suggests you pull over and download an app to treat the symptoms?

There is a shift happening where technology is enabling healthcare to move out of the hospital into your own home. The evolution of sensors such as wearables in combination with a desire to make it easier for an aging population to live independently in their own home for as long as possible is opening up opportunities for innovators.

Whether it’s a care robot that reminds you to take your medications or chatbots that act as symptom checker or even as someone to talk to if you are going through mental health issues, the evolution of artificial intelligence is pushing the boundaries of what we believe is possible.”

ON FINDING YOUR TRIBE

“I left the security of my job and career seven years ago, shifting from a large organisation to working independently. What’s been critical to my wellbeing and feeling satisfied with my change of direction has been finding members of my tribe. When I say tribe, I mean in the sense of: I’m at a conference and spontaneously meet someone who’s 20 years younger in different field from different part of the world – and we find out we have shared interests and values.

“The reason I’m proud to be a Huckletree member, is that it has attracted people who are part of the same tribe. Regardless of the tech they’re using, ethnicity, sexuality, country of origin, it’s that meaning, belonging and purpose that something like the Huckletree community allows you to understand and resonates with you.”