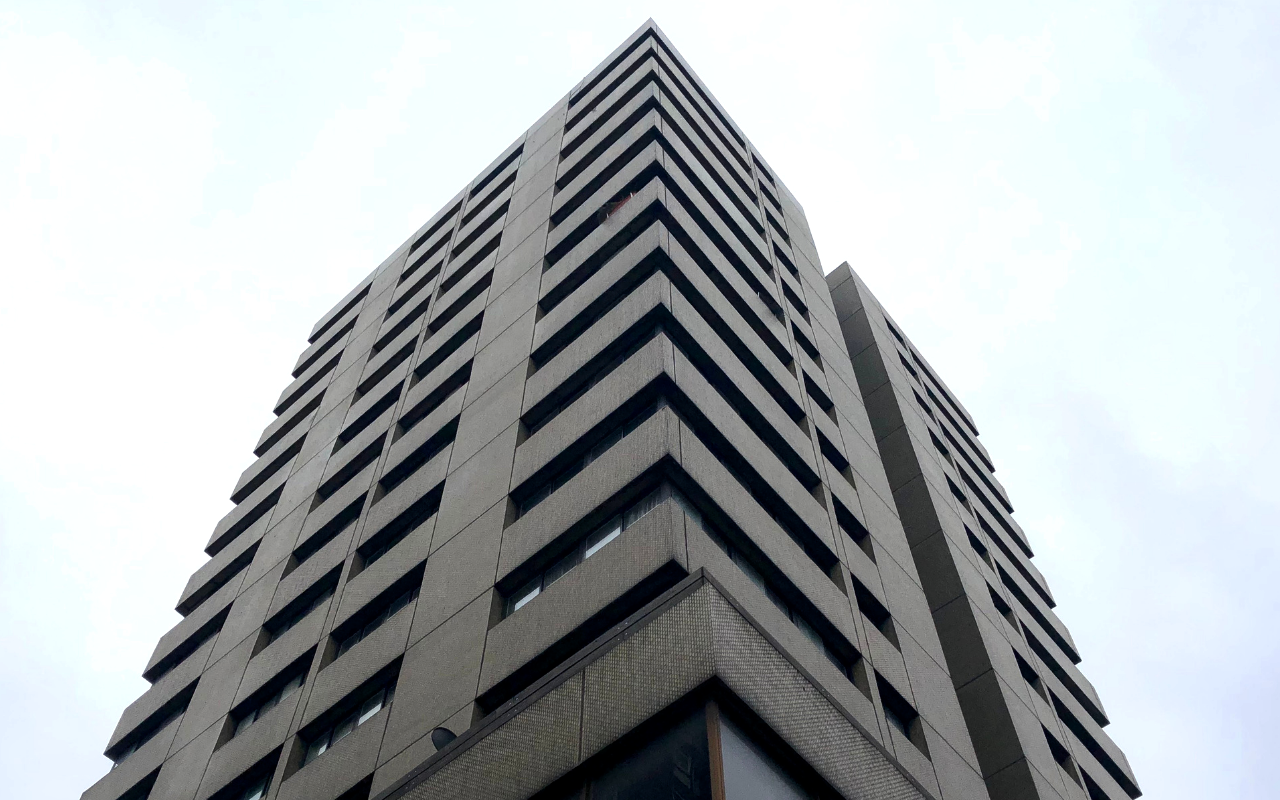 Controversial. Lauded. No architecture movement has proved more divisive than Brutalism. Now seems like a good time to explore why we’ve chosen a Brutalist building for our new Soho workspace…

Ingestre Court stands proudly amidst a square of classical red brick period buildings. Beneath its tower of residential apartments, a chunky, jutting base now plays home to Huckletree Soho. This Spring, we’ll open its doors to our first Central London community, bringing together VCs and digital lifestyle innovators.

I’m the first to admit that I’m a fully signed up member of this particular architectural fan club. A rich seam of concrete runs through my life, emerging during my degree at the University of East Anglia in Norwich. Three years roaming its infamous concrete campus (as approved by Mike Skinner) inescapably converted me to the brutal aesthetic. As a confirmed lover of blocky labyrinths, I’m a natural cheerleader for our new Soho workspace.

Yet to board the Brutalist train? Consider this a of the genre…

Brutalism emerged in the postwar era of the ‘50s and ‘60s. Drawn from the radical Bauhaus school of design, its name is derived from the French term ‘béton-brut’, aka the raw concrete used in construction. Here in London, it became a signature of the epic movement to rebuild the landscape blighted by World War 2 bombs. Consequently, its buildings became synonymous with a bold new era of honesty in architecture.

Brutalism soon became a signifier of cultural innovation, too. Aside from the utopian vision for residential buildings such as the iconic Balfron Tower, it plays host to some of London’s most pioneering creative hubs. Camberwell Art College. The Southbank Centre. The National Theatre. Barbican Centre. These dramatic, skyline-imposing structures have all been misunderstood in their time, and it’s easy to see why.

Brutalism is rough. It’s real. It’s knowingly divisive. Its concrete structures are willfully confident. It’s the very definition of our value ‘be renegade’.

Let’s be honest here. Concrete is a bit, , marmite. For every Brutalism fan (and you’re never ‘meh’ about it), there’s a passionate detractor – at every level.

In 2016, government minister John Hayes actually declared war on swathes of Brutalist architecture in London. Taking aim at my fellow concrete fans, he remarked that fans of the genre “cling to a tired desire to shock, a sad addiction to the newness of things.”

However, times are changing.

In recent years, previously reviled Brutalist buildings have been reappraised for their progressive design. Try scrolling the Explore page and you’ll swiftly run into numerous arty, sharp-angled building ‘grams. Barbican Conservatory is now certified Bumble first date gold. Even Kanye has taken inspiration from the genre for his utilitarian studio. Now if that isn’t a signifier of a burgeoning cultural moment…

It might not be Yeezy HQ (yet!), but there’s something special about our very own concrete hub.

Brutalist buildings are often stereotyped as being ‘cold’ or ‘unwelcoming’. I can’t think of a more welcoming space than our in-house meditation space, Dreamscape. A cocooning environment, you can think big (or switch off your brain) surrounded by projections of futuristic cityscapes and forests, nestled in the heart of Huckletree Soho.

Ingestre Court doesn’t have the sleek shining glass exterior of Soho’s new developments. It doesn’t have the dandyish lure of its surrounding Georgian blocks. However, Huckletree Soho does have a renegade aesthetic – and spirit to match.

Our growing community is taking shape in a space designed to be uncompromising. We’re curating some of the VC industry’s most disruptive names, including Silicon Valley Bank and Concentric. In short, it makes total sense that our exterior is just as uncompromising as our members within.

If you’re on the hunt for Soho workspace that’s as radical as your business, get in touch!